Assembly by-elections heat up in two Telugu states. The campaign is reaching a climax. Leaders of the respective parties go to every village and every house in the respective constituencies and greet the voters. The campaign was in full swing. In addition, as the polling deadline approaches, bullets of words are exploding between the leaders of the ruling and opposition parties. By-elections are further heating up the atmosphere.

Polling on the 30th

It is known that by-elections will be held for Huzurabad in Telangana and Badvelu Assembly constituencies in AP. Polling will be on the 30th of this month. The Central Election Commission has scheduled the counting of votes for the 2nd of next month. The Telugu Desam Party did not field a candidate in Badvelu. Did not run in this election. TDP has no candidate to contest in Huzurabad. That is why there are opinions that he is cooperating with the Congress. The BJP is in competition in both these places. Bumping the ruling parties.

Compared to Badvelu- Huzurabad by-election intensity is high. There was a triangular competition. Itala Rajender, who remained a minister in the TRS government for a few days. In particular, the BJP has taken this position very seriously. The Almighty is also pushing for the Yates to win.

Congress does not receive the deposit

Dhima is expected to win the Huzurabad by-election. Rose leaders say their candidate Gell Srinivas Yadav’s victory is a fact and is focused on the majority. TRS executive chairman and municipal minister KTR Josyam said the Congress would not get a deposit in this triangular battle. He challenged Pradesh Congress Committee president Rewant Reddy to take a deposit in the Huzurabad by-election.

KCR chit-chatted with reporters who met him at the TRS headquarters. Huzurabad spoke at the by-election. KTR alleged that the Congress and the BJP had conspired in Huzurabad. It is flagged that Congress has fielded a dummy candidate. He also indirectly criticized the Congress for collaborating with the BJP for victory. KTR said that it seems certain that Rajender will join the Congress in a few days. Yates said Congress leaders would invite him into their party. Former MP Vivek Venkataswamy also said that he would join the Congress. He said he had accurate information on this.

Chief Minister KCR said that the welfare schemes and development projects being implemented by his government have become a compass for the country. KCR was described as a leader with a vision. He said that they are acting with foresight, keeping in view the future of Telangana and taking decisions accordingly. While KCR is a leader with a vision .. KTR made the leaders of other parties television.

Chilaka prophecy is correct for Revanth

KTR commented that the Congress party would not even get a deposit in the Huzurabad by-election and that it would be better if Rewant Reddy made a jerk after that. He lauded Bhatti Vikrama as the only sincere leader in the Congress party. He asserted that his confession had been obtained through torture. Gotti said the air of aggression in Congress was running high. KTR made it clear that the Congress could not recover.

KTR said that 10 nominations have been filed nominating KCR for the post of TRS party president. He said ministers had already filed nominations on behalf of KCR. The party said preparations for the bicentennial celebrations were in full swing. He said that a victory rally was to be held on November 15. He appealed to party leaders, activists and people to take heavy RTC buses to evacuate and not to travel that day.

Farmers’ Associations that do not give up! 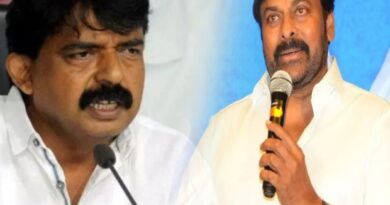 When did the Cine Adults meet Jagan? What Happens behind the Scenes?