The first round results of the first round of counting of the prestigious Huzurabad by-election have been revealed. In the first round, the votes for the Huzurabad constituency center were counted. In this, BJP candidate Etela Rajender got 166 votes over TRS candidate. In this round, the BJP got 4,610 votes, the TRS 4444 and the Congress 119 votes. It looks like the close fight is likely to continue as expected. Competitive conditions seem to be the same as a until the final round.

A total of 723 votes were polled in the Huzurabad postal ballot. Of these, 503 were for TRS and 159 for BJP. Congress received 32 votes. Meanwhile, officials ruled that 14 votes were invalid. The counting of votes for the Huzurabad by-election will be completed in a total of 22 rounds in connection with this by-election. Each round can take up to 30 minutes. The votes of the villages in the Huzurabad constituency were first counted.

Tension round to round

After that the counting of votes in Veenavanka, Jammikunta, Illandakunta and Kamlapur constituencies will take place. The votes will be counted first in Pothireddypeta and finally in Shambhunipalli. The final result is expected by 4 p.m. In the Huzurabad by-election, 30 candidates are contesting. Gellu Srinivas Yadav from TRS, Balmuri Venkat from Congress and Etela Rajender from BJP are in the fray. A three-tier security has been set up at the counting centers. Section 144 is being implemented. Police did not allow the victory rallies.

In the Huzurabad Assembly by-election on Saturday, voters turned out in large numbers to cast their ballots. With that, a record 86.64 per cent polling was recorded. The total number of votes cast was 2,36,873, of which 2,05,236 were for the right to vote. 1,02,523 (87.05 per cent) men and 1,02,712 (86.25 per cent) women exercised their right to vote. Meanwhile, the TRS party, which dominated the postal ballot, expects to continue its dominance till the final result.

Increased slowness in BJP with exit polls At the same time slowness is seen among BJP leaders with exit poll results. BJP leaders say that the final result is in their favor. However, the 16 per cent turnout in the last two hours on polling day is now confusing the two major parties. With this .. although it looks slow up .. the leaders of both the parties are still in tension at the counting centers. KCR at the inauguration of Dalitbandhu scheme! End Social Discrimination! 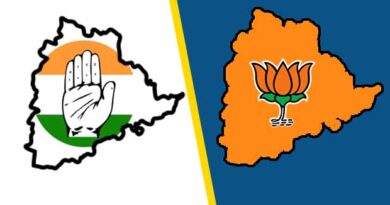 T BJP vs T PCC: Can’t decide whether to fight and win over KCR!